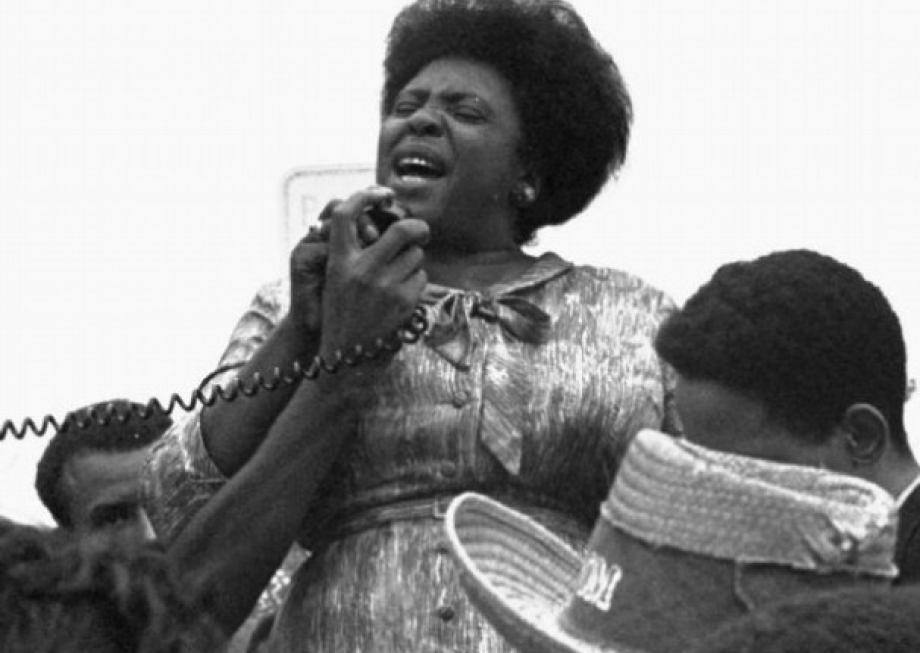 Liza Bramlett was a slave.  Raped by a succession of owners, she eventually bore them 20 children.  She bore three others in consensual relationships with an African-American man.  One of them was a daughter named Lou Ella.
In 1891, Lou Ella married a man named James Townsend, a sharecropper and sometime bootlegger and preacher.  The couple would have 20 children of their own.   The youngest was a daughter they named Fannie Lou.
The woman who would become one of the nation’s most influential voting for voting rights and women’s rights grew up in Sunflower County, MS.  She was sent to the cotton fields when she was six.  She dropped out of school when she was 12.  In 1944, she married a man named Perry “Pap” Hamer.  He was a sharecropper, too.
And there, the pattern of her life seemed set.
Then, in the summer of 1962, when she was 44 years old, Fannie Lou Hamer made an impulsive decision that would change her life.  She attended a voting rights meeting organized by the Student Nonviolent Coordinating Committee, or SNCC.  For Hamer, it was like the proverbial lightbulb going on in the proverbial darkened room.  James Bevel of the Southern Christian Leadership Conference spoke.  Bob Moses and James Forman of SNCC led the congregation in singing freedom songs.  And Hamer was suddenly afire with stunning new realization.
She had rights.
When Bevel asked for volunteers to seek to register at the courthouse 25 miles away, Hamer lifted her hand “up as high as I could get it.”  Four days later,  a busload of 75 would be black voters pulled up at the courthouse.  For a moment, the people paused, paralyzed the enormity of what they were about to attempt.  Then Fannie Lou Hamer stepped off the bus and marched fearlessly into the courthouse.
None of them were allowed to register that day.  In a typical tactic, the registrar asked Hamer to first copy and interpret a portion of the state constitution.  “I could copy it,” she would say later, “but I sure couldn’t interpret it, but up to that time, I hadn’t even known Mississippi had a constitution.”  On the way back to Ruleville, police pulled the bus over, arrested one of the SNCC workers and fined the driver because, they said, the bus was “too yellow.”
Thus defeated in her first encounter with state authority over her right to vote, Hamer was, nevertheless, anything but daunted.  On that defining day, she found the cause that would animate the rest of her life.
Hamer made it official in December of that same year, joining SNCC as a fieldworker.  As a consequence, she was immediately kicked out of the shack she and her family shared on a plantation near Ruleville.  Hamer’s response brimmed with the righteous pugnacity she would bring to the fight for equal rights:
‘They kicked me off the plantation, they set me free. It's the best thing that could happen. Now I can work for my people.’”
And she did.
With a thunderous voice and a plainspoken country wisdom, she became one of the movement’s most effective fighters for civil rights.  She would repeatedly pay the price for her boldness: threatened, arrested, shot at and beaten.
The worst was probably in a county jail in Winona in 1963.  She was with a group en route to A Greyhound bus driver, who objected to ferrying civil rights workers knocked some of the workers to the ground and then ordered them to the back of the bus.  En route to Winona, he stopped several times to use payphones.  It turned out he had arranged a brutal welcome for the group at the bus terminal.
Hamer would be beaten and kicked and, with others in her group, arrested and thrown into a squad car.  At the jail, the beatings intensified, a group of police going from cell to cell brutalizing the civil rights workers.
“Get up there, fatso,” one officer sneered when they came to hamer.  “You bitch, you, we gon’ make you wish you was dead.”
Aided by two black men who were forced to participate, Hamer was thrown facedown on a jail bed and beaten with a blackjack, first by one man then by another.   Hamer’s injuries would follow her the rest of her life.
Yet, she continued to fight for civil rights.  In 1964, she helped found the Mississippi Freedom Democratic Party as an alternative to the state’s all-white delegation.  Testifying before the credentials committee in an electrifying televised session, she described her ordeal and demanded that the MFDP be seated at the convention.
“And if the Freedom Democratic Party is not seated now I question America.  Is this America, the land of the free and the home of the brave, where we have to sleep with our telephones off of the hook because our lives be threatened daily because we want to live as decent human beings in America?”
President Johnson, already under fire from his party’s conservatives for his support for the Civil Rights Act, refused to accede to the seating of the black delegation.
The following year, Hamer made an unsuccessful run for Congress.  She would go to found organizations dedicated to feeding local families in need and to increase business opportunities in and around Ruleville.  In 1971 Hamer, who had never forgotten her grandmother’s ordeal, founded the National Women’s Political Caucus.  “We was used as black women, over and over and over,” she said.
In 1976, Fannie Lou Hamer was diagnosed with breast cancer.  She died the following year.  Hundreds of people came to the church in Ruleville to say their farewells.  Andrew Young delivered her eulogy.  And Hamer, often described as a tireless advocate for freedom, was buried beneath a headstone emblazoned with something she famously said that managed, in just ten short words, to sum up both her life and African-American life in a country were equality remains a controversial thing.
“I am sick and tired of being sick and tired.”
Sources: The Senator and the Sharecropper by Chris Myers Asch, Biography.com, The New York Times