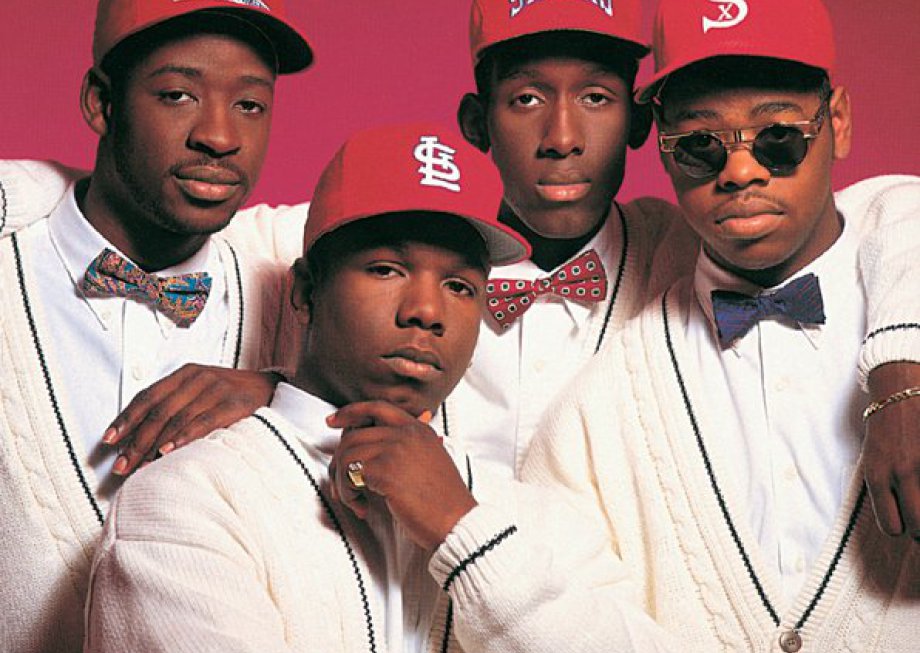 Boyz II Men
One of the most successful recording groups of the 1990s, Boyz 2 Men began in 1986 with the friendship of four ninth grade voice majors at the High School for Creative and Performing Arts in Philadelphia.  Shawn Stockman, Michael McCary, Nathan Morris and Wayna Morris (no relation) were studying classical music in school, but were growing up in homes where harmony groups from the 1960s and ‘70s – The O’Jays, The Stylistics, The Temptations – were constantly heard.  The boys were also inspired by the acapella gospel group, Take 6.
Like most members of those groups, Stockman, McCary and the Morrises also spent a great of time singing in church.   Between classes, they worked out their harmonies in the school bathroom.  The name of their fledgling group came from a New Edition song, Boys To Men.
It all came together in 1989, when the quartet managed to get backstage at a concert and corralled Michael Bivins of New Edition and Bell Biv Devoe fame into giving them an impromptu audition.  Impressed by their acapella performance of New Edition’s Can You Stand The Rain, Bivins signed them to a production deal.  The result was the group’s debut album, Cooleyhighharmony.
Their hit single, Motownphilly was an up-tempo song made for the clubs, but its success would prove to be deceptive.  It was actually with a series of harmony-infused ballads that Boyz II Men would dominate the charts in the 1990s.  Those hits included: including A Song For Mama, It’s So Hard To Say Goodbye To Yesterday and On Bended Knee.
Several of their hits rewrote the record books.  In 1992, End of the Road became the first song to spend 13 weeks at the top of the pop charts.  Two years later, the group broke its own record as I’ll Make Love To You became the first song to perch at that peak for a solid 14 weeks.  Two years after that, the group topped itself yet again as One Sweet Day, a duet with Mariah Carey, became the first song to top the pop charts for 16 weeks, a feat no other song has ever achieved.
Michael McCary left in 2003, leaving Boyz II Men to carry on as a trio.  The group continues recording, though with markedly less success than during its 1990s heyday.
Signature lineup: Shawn Stockman, Michael McCary, Nathan Morris and Wayna Morris
Signature songs: End of the Road, I’ll Make Love To You, One Sweet Day,  A Song For Mama