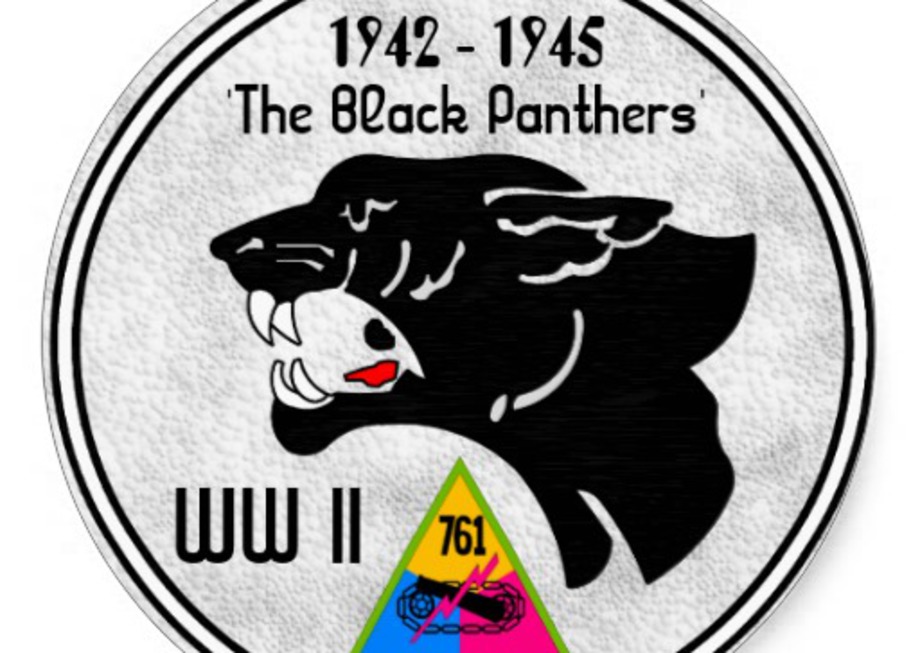 The Black Panthers (tank battalion)
The all-black 761st  tank battalion was organized by the U.S. Army on March 15, 1942, and activated April 1, 1942, at Camp Claiborne, Louisiana.  The unit motto was “Come out fighting,” based on the answer boxing champion Joe Louis gave a reporter who had asked what he would do against German boxer Max Schmeling.
In training in Louisiana and, later, in Texas, the men of the 761st faced non-stop reminders from both the Army and the local communities of their “place” in the nation of their birth.  They were routinely insulted and denigrated by officers and citizens alike.  Worse, they were held back from battle long after they had been trained to a knife’s edge of readiness.  One of their officers was court martialed after an altercation with a bus driver who mistakenly believed the officer was seated next to a white woman.  The officer’s name was Jackie Robinson.
One of the few exceptions to this litany of white abuse was Col. Paul Bates, who eventually became the battalion’s commanding officer.  Upon taking command, he called a dress inspection and announced:
“They say black troops can’t fight, that you won’t fight. Well, we’re proving ’em wrong. Well, you guys are not supposed to be as clean as other people. There’s a simple answer to that: Make damn sure you’re cleaner than anybody else you ever saw in your life, particularly all those white bastards out there. I want your uniforms to look better, cleaner than theirs do. I want your shoes and boots to shine better. I want you to be better. Because, gentlemen, you must get ready. This battalion is going to war!”
The 761st  finally landed on Omaha Beach in France on October 10th, 1944, the first black tankers to enter the fighting.  It would earn a reputation for unsurpassed bravery as the invading Allies pushed the Germans back across the French countryside into Germany.  The black tankers joined the massive counteroffensive that turned back the Germans after their desperate surprise attack sought to break the Allied lines in what became known as the Battle of the Bulge.
A number of the Black Panthers were singled out for their reckless courage.  Sgt. Warren G.H. Crecy, for instance, was famed for an episode in which he climbed out of a tank that had become stuck in an antitank ditch and, ignoring artillery and machine gun fire that boomed and whined all around him, calmly attached a tow cable to the vehicle so that it could be pulled loose.
Sgt. Ruben Rivers was grievously injured when his tank ran over an anti-mine on the road to Guebling, France, a German stronghold.  The blast shredded his leg and destroyed his knee, but when medics tried to give him morphine for the pain, Rivers refused.  They told him he would have to be evacuated, but he refused that, too.
Even when directly ordered by his captain, Rivers would not allow himself to be medicated or transported to safety.  “Sir,” he said, “this is one order I’m going to have to disobey.”  He disobeyed again and again, even as the leg became infected and his temperature jumped to over 100 degrees.
Rivers was killed days later in a battle with German tanks.  For his heroism, he was awarded the Medal of Honor.  The 761st itself was recognized in 1978 when President Jimmy Carter bestowed upon it a Presidential Unit Citation.  The citation read in part: "Throughout this period of combat, the courageous and professional actions of the members of the ‘Black Panther’ battalion, coupled with their indomitable fighting spirit and devotion to duty, reflect great credit on the 761st Tank Battalion, the United States Army, and this nation."
Learn More: Patton’s Panthers by Charles W. Sasser; The Black Panthers by Gina M. DiNicolo; Brothers in Arms by Kareem Abdul-Jabbar and Anthony Walton