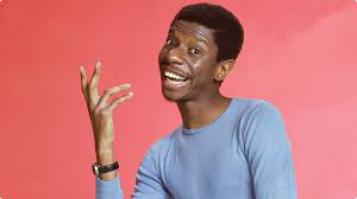 Skinny as a stick figure on a diet, with features so rubbery they could have been made by B.F. Goodrich, a mouth that gaped like a hippopotamus yawn and a comic delivery about as subtle as a punch in the face, Jimmie Walker was, at best, an unlikely television star.  But he went on to become not just “a” star, but one of the biggest stars of the 1970s as part of the cast of Good Times.
The show itself was something of a pioneer, the first to center on the struggles of an underclass African-American family,.  The Evanses – Esther Rolle as the mother Florida, John Amos as the father, James, Ralph Carter as brother Michael, BernNadette Stanis as sister, Thelma, with Ja’net DuBois as neighbor Wilona Woods and Walker as eldest son, J.J. – struggled with spotty employment, high prices, medical crises, street crime, poverty and other challenges familiar to the African-American underclass.
But although Good Times, from pioneering producer Norman Lear, started out telling the family’s story, Walker quickly became the centerpiece.  His mugging, eye-rolling mischief and ubiquitous catchphrase – “Dy-no-mite!” - became its indelible signature.
For as much as these elements made the show more popular, they also created tension on the set.  Amos was fired from the cast after the third season after, he has said, being too vehement in his complaints about Walker’s “shucking and jiving.”  The character of James Evans was killed off.
Rolle left the show herself after the third season, citing the same complaints.  A year later, she was lured back with a promise that Walker’s character would be toned down.
Walker professed in a 2012 interview not to ever given the controversy much thought or to have spoken to his co-stars about it.   He also said he had never seen an episode of the show that made him a star.
Walker would also appear (alongside Sidney Poitier and Bill Cosby) in the 1975 comedy Let’s Do It Again, as the unlikely boxer Bootney Farnsworth.   In the years since Good Times ended in 1979, Walker has worked regularly as a standup comedian and has managed to find acting roles – he appeared as himself on Scrubs and was “Grampa Gene” on Everybody Hates Chris.  Often, he has found himself asked to play characters who were little more than variations on J.J.
Sources: imdb.com, the Archive of American Television, CBS News.com, TheWrap.com