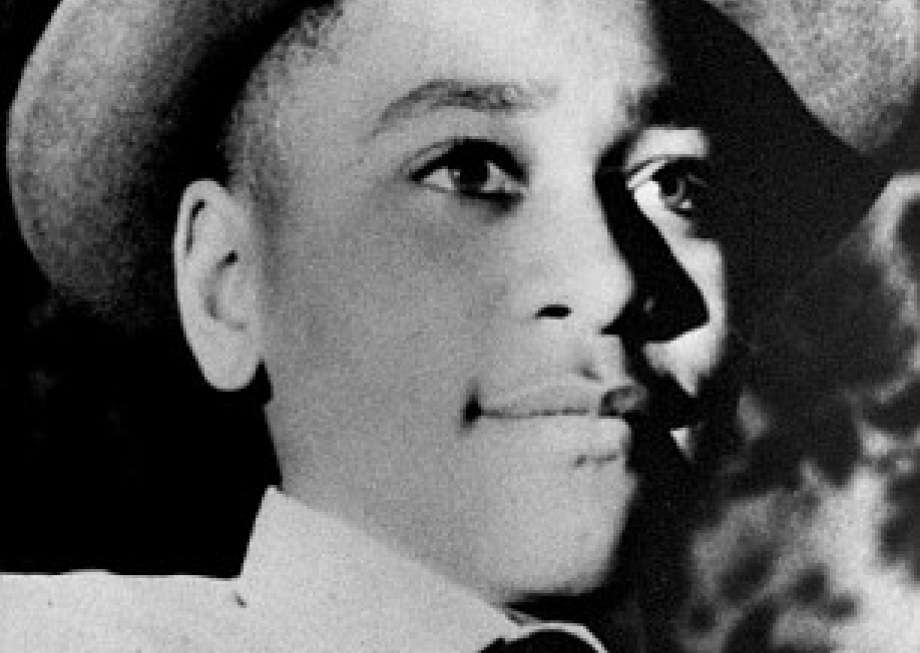 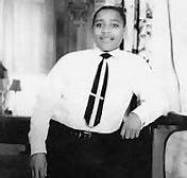 On that day in early December of 1955 when she galvanized what would become known as the Civil Rights Movement, Rosa Parks was said to have thinking about him.
In that, she was hardly unique.  As that midcentury summer yielded to fall and winter loomed, much of the nation and even the world were thinking about Emmett Till, a 14-year old African-American boy from Chicago who was murdered by white men in Mississippi.  For African Americans in particular, he was a constant presence – not just a painful reminder of the high price of blackness, but also a visceral challenge: how long will this keep happening, how will we put up with it?
Emmett Till became a lasting symbol.  Before that, he was just a boy.
He was the son of the former Mamie Carthan who, in October of 1940, became the 18-year old bride of Louis Till, described in Timothy B. Tyson’s book, The Blood of Emmett Till as “a burly, athletic gambler.”  The unhappy marriage lasted barely long enough to produce the couple’s only child.
By the time Emmett was two, the Tills had separated.  Louis Till joined the wartime Army.  When Emmett was five, Mamie received a telegram from the War Department informing her that her estranged husband had been executed in Italy for “willful misconduct.”  The military forwarded her his meager property, including a silver ring bearing his initials.
Emmett grew to be a chubby, short-statured boy who loved baseball and basketball and sang do-wop (badly) with his friends.  His friends and family would remember him as an inveterate prankster and aspiring humorist, a fan of jokes about chickens crossing roads, and a devoted imitator of George Gobel, Jack Benny, Red Skelton and other lords of ‘40s and ‘50s comedy.  He liked going to church.
When the fateful invitation came for Emmett to spend the summer with family in Mississippi, his mother cautioned him how to behave down there: do not talk to white people if you can help it and you can’t help it, always address them as “ma’am” and “sir.”  If a white woman approaches you on the sidewalk, step into the street.  Do not meet her eyes.
Emmett protested that already knew all of that, but in the fateful August 24th encounter that would cost him his life, he violated those protocols of separation and humility.  It is not known precisely what he said to Carolyn Bryant, the young white proprietor of Bryant’s Grocery and Meat Market in the nothing town of Money, MS.  Whatever he said in the fleeting moments it took him to buy gum, she considered it “fresh,” out of bounds for a black boy in 1955, and she stormed out of the store to retrieve a gun from a car parked outside.  When she did, Emmett serenaded her with a wolf whistle.  His alarmed friends spirited him away.
The gun-wielding white men came to Moses Wright’s door at 2 in the morning of August 28th, demanding that he produce his nephew, the boy from Chicago.  “Papa Mose” would never see him alive again.
Emmett Till’s body surfaced three days later in the Tallahatchie River, despite being weighted down by a heavy piece of farm equipment tied to its neck by barbed wire.  His wounds were horrific: a bullet hole in the head, hatchet wounds to the skull, one eye dangling on his cheek by the optic nerve, the other simply gone.  After three days in the water, the body had become a bloated grotesquerie, but Wright was able to identify Emmett by his father’s silver ring: “LT.”
Authorities in Mississippi pushed for a quick funeral, but the grieving mother demanded that her son’s body be shipped North.  There, she refused America the comfort of a closed-casket funeral.  Tens of thousands of people lined up to view the body of her son.  Jet magazine published the stomach-churning image, allowing millions more around the country to view what remained of Emmett Till.
“I wanted the world to see what I had seen,” his mother later explained.  “I wanted the world to see what had happened in Mississippi.  I wanted the world to see what had happened in America.”
The next month, Carolyn Bryant’s husband Roy and his half-brother, J.W. Milam would go on trial for the murder.  Moses Wright, in a show of unthinkable courage, identified them in court as the men who had taken his nephew.  Both men confessed to the kidnapping.  Witnesses placed the brothers at a barn inside which, they said they heard a boy screaming.
A jury of 12 white men took less than an hour to return an acquittal.  As one juror later boasted, “If we hadn’t stopped to drink pop, it wouldn’t have taken that long.”
Because that’s how America was in 1955.
Though he died his grisly death decades ago, Emmett Till remains a touchstone for African Americans still fed up with the pay the high cost of being, and for a nation still grappling with an awful habit and history of racial violence.  As Lonnie Bunch, founding director of the National Museum of African-American History and Culture told Smithsonian magazine, “Emmett Till remains an example of the vulnerability of certain segments of our population and the fact that though America has changed in profound ways, the kind of assumptions, attitudes and beliefs that led to the murder of Emmett Till have not yet vanished in the United States.”
Source: The Blood of Emmett Till by Timothy B. Tyson, Biography.com, The Dictionary of American Negro Biography by Rayford Logan, Smithsonian magazine