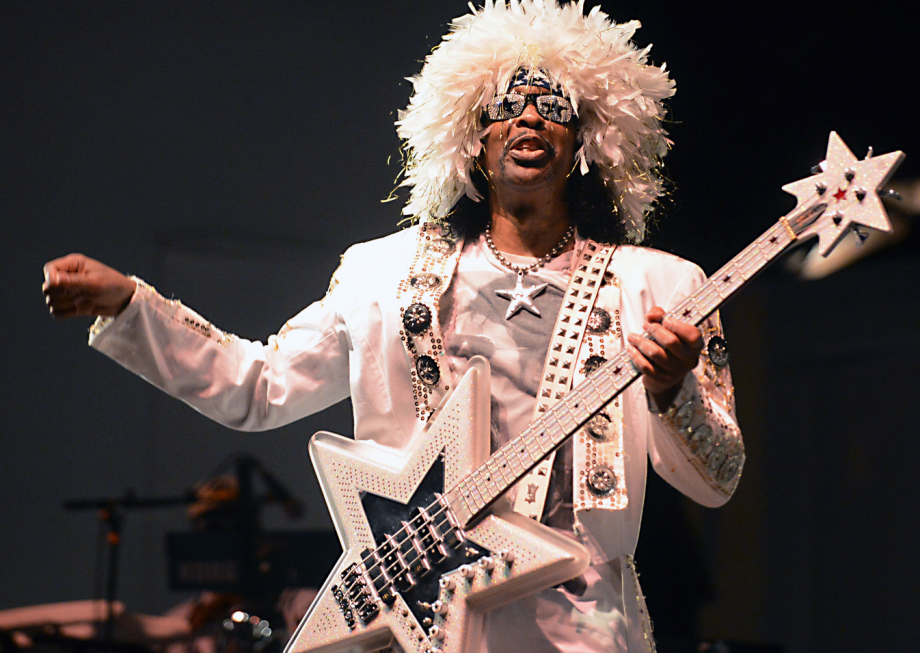 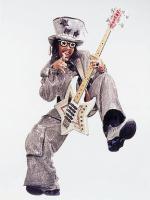 William Earl “Bootsy” Collins
Bassist and singer
Born October 26, 1951 in Cincinnati, OH
His fans were called “geepies,” representing the younger contingent of “funkateers,” i.e., fans of the Parliafunkadelicment Thang, which preached a gospel of a star child returning on the Mothership from the top of chocolate Milky Way to reclaim the pyramids and defend the funk from the clutches of Sir Nose D’Voidoffunk.  And if that makes no sense to you, congratulations.  Now you understand.
Or maybe you just had to be there.
“There” being defined as that period of the middle and late 1970s during which funk – R&B dance music with fat bass grooves, over-the-top vocal performances, sly humor and often cartoonish themes – was the sound of urban America.  The key figure in the funk movement was George Clinton, who led bands Parliament and Funkadelic.
Collins, who joined those bands in 1972, formed his own spin-off act in 1976.  Booty’s Rubber Band announced itself with the hit, Stretchin’ Out (In A Rubber Band).   It’s almost seven minutes of writhing bass, punchy horns and utter nonsense.  “Hallelujah!” cries Collins, by way of introduction.  “They call me Casper.  Not the friendly ghost, but the holy ghost!”
But all that relentless silliness was rooted in a rock solid musicianship honed by many years of apprenticeship and dues paying.  Collins formed his first band, The Pacesetters in 1968 as a teenage wunderkind.  Its members included his brother, Phelps “Catfish” Collins, and Phillipe Wynne, who would go on to become a lead singer of the Spinners.
By 1969, the Pacesetters had been tapped as the backup band for the one and only James Brown.  The band, rechristened the JBs, supported Brown onstage and on such memorable hits as Get Up, I Feel Like Being a Sex Machine.  For a brief period after leaving Brown, the band would call itself the House Guests.  Then came the fateful meeting with George Clinton.
Bootsy, with his infectious grin, star-shaped sun glasses and a loopy sense of humor, soon became a star in his own right.  His first album, Stretchin’ Out In Bootsy’s Rubber Band, was followed in short order by Ah…The Name is Bootsy, Baby and Bootsy? Player of the Year.
Though the funk movement would largely fade away with the coming of the 1980s, Collins has remained busy, both touring and performing.  In 1994, under the name Bootsy’s New Rubber Band, Collins released the album Blasters of the Universe.  Four years later came the follow-up, Fresh Outta “P” University.  In 2006 came a holiday album, Christmas Is 4 Ever and in 2011, Collins released Tha Funk Capital of the World.
In 1997 Collins was inducted into the Rock and Roll Hall of Fame as a member of Parliament-Funkadelic.  His signature hits include: Stretchin’ Out (In A Rubber Band) (1976) Bootzilla (1978); and The Pinocchio Theory (1977)
Sources: Bootsycollins.com, Billboard.com, imdb.com and The 100 Greatest Bands of All Time, edited by David V. Moskowitz