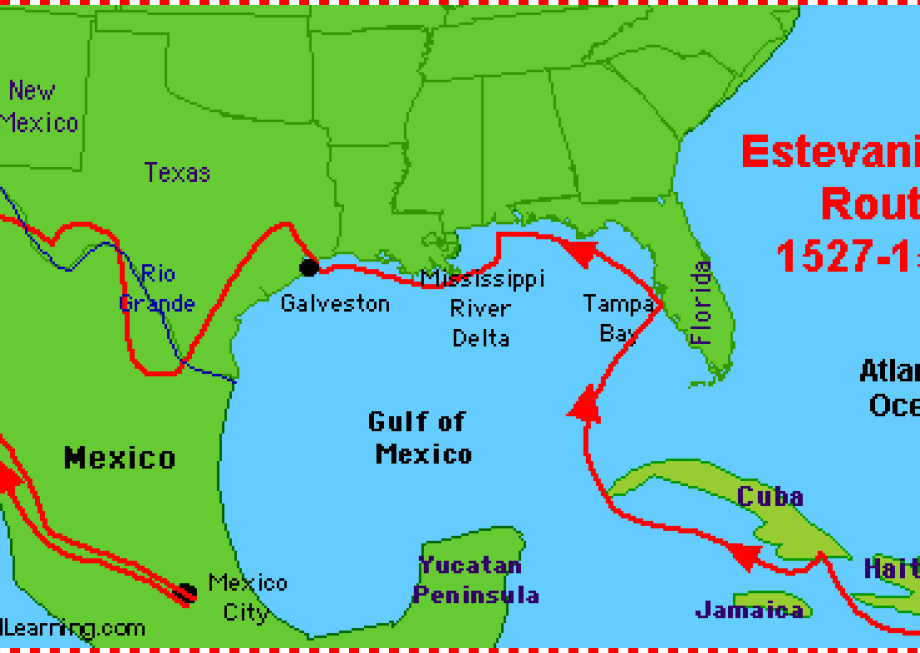 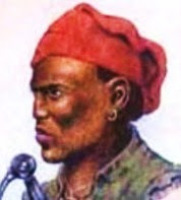 Esteban is believed to have been captured and Christianized in 1513, when Portugal captured the city of Azamore on the north coast of Africa.  The teenager was sold to the Spanish as a slave and became the property of the explorer Andres Dorantes de Carranza.
In 1527, Dorantes took Esteban on an expedition to Florida.  Their five ships crossed the ocean successfully, landing near what is now Tampa Bay.  But that would be the last thing to go right for Dorantes.  Disease, drowning, starvation and attacks by Native Americans whittled a force of 300 would-be conquerors down to just four.  Dorantes and Esteban were among the survivors.
For a few years, the small band found shelter with friendly American Indians on the Gulf Coast, then began a journey west in the hope of reaching Mexico City.  After a trek through what are now the states of Alabama, Mississippi and Texas, the men reached their goal in 1536.  The story of their journey caused a sensation and captured the imagination of the Spanish Viceroy, Antonio de Mendoza, who dreamt of cities of gold to be found to the north.
Dorantes, having had more than his fill of North America, declined to join Mendoza on the new expedition.  He and the other four desired only to return to Spain.  But Dorantes did agree to sell Esteban to Mendoza to act as a guide.
In 1539, Mendoza sent Esteban north as a guide for Catholic friar Fray Marcos de Niza.  Esteban traveled into the desert a few days ahead of Marcos; he would send Indian messengers back to report his progress to the friar.  In so doing, Esteban became the first non-Indian to travel in what are now the states of Arizona and New Mexico.
He would not, however, live to complete the trek, much less to find the fabled cities of gold.  In mid-May, a messenger returned to Marcos to tell him his guide had been killed by Pueblo Indians.  Frightened, the Catholic friar turned the expedition around and returned to Mexico City.
Sources: WashingtonPost.com, History.com, The Dictionary of American Negro Biography by Rayford W. Logan and Michael R. Winston